Settlers of a Dead God 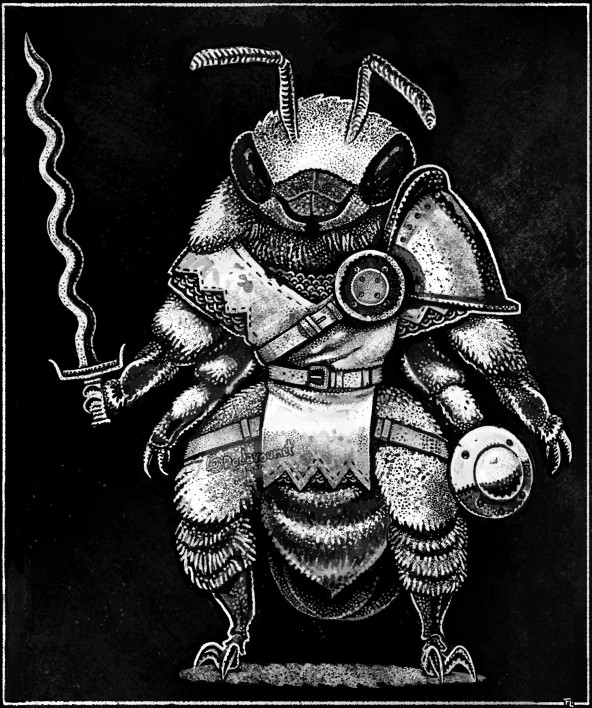 Introducing the final illustration for the Beefolk, one of the six playable races of Settlers of the Dead God.

The inhabitants of the land of the Dead God are intelligent insects with humanoid characteristics, known as insectoids. Think of planet earth but instead of the intelligent life of mammals proceeding, it came from insects. There are races from spiders, ants, moths and even mushrooms that live on this land.

The Beefolk are a bee-like insectoid. They have a yellow and black body, two legs and four arms, antennae on the upper part and a stinger. Although they only appear to have two large eyes, Beefolk actually have a total of five eyes.

Beefolk can use their stinger to attack, it has a powerful poison that causes death. After they attack they bury their stinger in the victim and can no longer pull it out, leaving behind not only the stinger, but also part of his digestive tract, muscles and nerves.

They have not lost their ability to produce honey. Once a day, as long as they have water and flowers, they can produce a honey ration that you can use as a food ration.

Although it is rare to see a beefolk outside of it´s colony, there are cases of this species that are encouraged to go on adventures into The Land of the Dead God. This can be for different reasons such as a desire for wealth or fame, keeping a promise or having fallen from grace for some reason within the community.

Designs by Rodar d’Argnan, you can find his portfolio on his Artstation and Instagram.

Here you can see the first sketches worked with Ronan, his work has been spectacular from the beginning.

If you want to know more about our upcoming tabletop RPG Settlers of the Dead God, please suscribe to our newsletter: